Information in English under, Norwegian on the way!

Superposition is the new creative quartet led by Helsinki-based drummer/composer Olavi Louhivuori. The band features some of the most ear-worthy musical talent in the buzzing Finnish scene in saxophonists Linda Fredriksson and Adele Sauros, plus bassist Mikael Saastamoinen. Superposition might be inspired by quantum physics but their music is a truest form of contemporary jazz, meaning that they’re reaching for the next unknown at all times. At times venturing far «out», at times locking into a hard groove, Superposition never fails to surprise. This is raw, unfiltered original music, no physics course required. Superposition’s debut album will be released on We Jazz Records in March 2020.

Olavi Louhivuori is known as the leader of his successful group Oddarrang, plus as the go-to drummer for the likes of Tomasz Stanko, Susanne Abbuehl, Claudio Filippini and Mats Eilertsen. In 2018, he premiered his new major work «Net Of Indra» with Nordic legends Eivind Lønning, Juhani Aaltonen and Palle Danielsson. Louhivuori has also released music as a solo artist on the influential Finnish label Svart Records under the title «Immediate Music». The groundwork for the upcoming Superposition release in 2020 has been laid with gigs at club and festivals, such as Pori Jazz in Finland – a concert which was also broadcasted on Finnish national television. The group is expected to be one of the major new names to emerge from the Finnish scene next year. 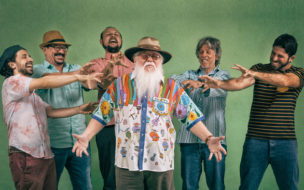