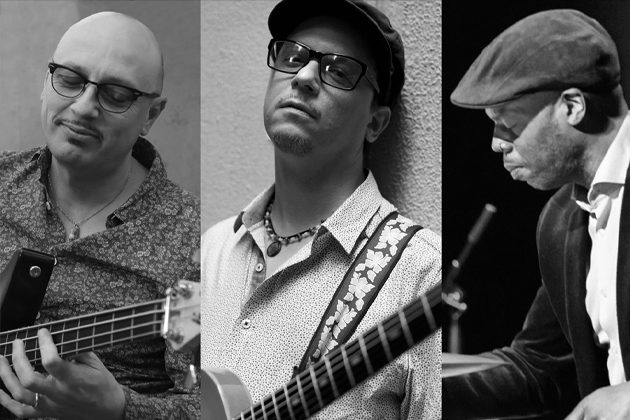 Berlin based guitarist Kurt Rosenwinkel (originally from Philadelphia) is one of the most influential role models for the current generation of jazz guitarists worldwide – due to his virtuoso playing and because he successfully enriches the modern jazz guitar vocabulary with influences from rock and hip-hop. His work reaches far beyond jazz.

Kurt Rosenwinkel Trio – Angels Around traverses new musical frontiers in the standard jazz idiom. While they embody and emote the rich traditions of jazz at its purest form, make no mistake, this music is thoroughly contemporary, focused, and for the here and now. Following on the success of 2009’s “Kurt Rosenwinkel Standards Trio – Reflections”, the new album cements Kurt Rosenwinkel’s standing as a living jazz master; a torch bearer for the art form at its purest and most honest level. Italian bassist Dario Deidda has long been known as one of the finest players on the European scene and has been featured on over 60 recordings as a sideman in addition to his two records as a bandleader. What sets Deidda apart is his entirely unique bass sound and approach. Deidda is the perfect bass counterpart to Rosenwinkel’s expansive approach on the guitar.

Percussionist Gregory “Hutch” Hutchinson has established himself as one of the foremost drum virtuosi of his generation. A musician’s drummer soundly rooted in the jazz tradition, Hutch is able to approach all styles of music with supreme accuracy and imagination, decorating compositions with his natural feel and mind-blowing innovation. His relationship with Kurt Rosenwinkel extends back to the New York jazz scene of the 1990’s, a fruitful and boundlessly creative time for many of today’s top players, and a period of great invention for jazz music as a whole.

«Rosenwinkel has come to be just as identifiable as Pat Metheny, Bill Frisell or any of the modern-school guitarists with whom he’s usually compared.» JazzTimes USA